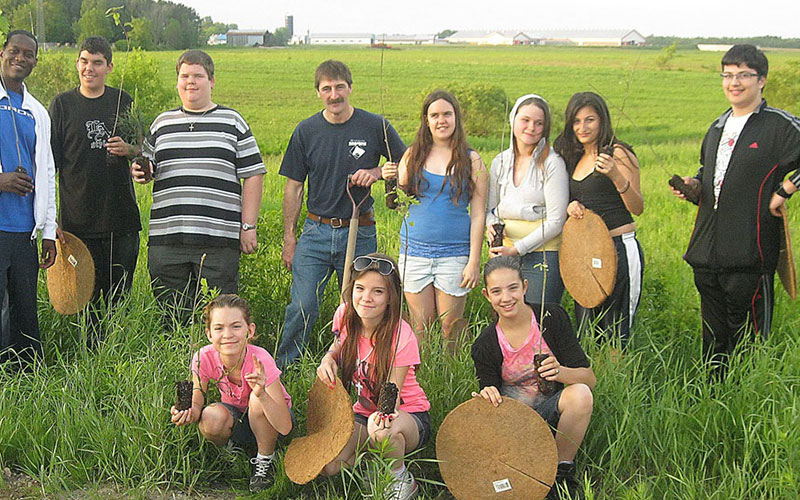 June 2011, Sainte-Françoise-de-Lotbinière – Approximately 150 oak and red pine trees have been planted as part of a project to establish a windbreak hedge along the Georges Hamel multifunctional trail, located in the Petite rivière du Chêne watershed in Centre-du-Québec. Support from the CMI Green Fund ” January 2011] was required for the purchase of the trees and bio discs, pre-formed mulch made from biodegradable coconut fibres. These discs, placed at the base of the trees during planting, protect them from invasive plants during their establishment phase.

The instigator of the project is Mario Lyonnais, dairy producer and mayor of the municipality of Sainte-Françoise for 14 years. The project was organized in collaboration with the ZIP (Zone d’intervention prioritaire) Les Deux Rives committee, which was responsible for supplying the equipment and providing technical support. A group of students from École St-Martin in Laval provided valuable labour during one of the Educational Farm Visits organized by the municipality. According to the Comité ZIP Les Deux Rives, a non-profit organization that aims to protect and enhance the St. Lawrence River, the Petite rivière du Chêne basin contains some of the most degraded waterways in Quebec. Eight out of ten sites are considered a priority in terms of intervention in the downstream portion of the Petite rivière du Chêne basin. The windbreak hedge planting project is therefore part of a broader objective aimed at improving water quality and preserving the ecosystem functions of the hydrological territory. The Georges Hamel multifunctional trail is named in honour of the famous country singer, a native of Sainte-Françoise. Photo: Courtesy Mario Lyonnais (center), surrounded by students from École St-Martin, Laval, who came to participate in a tree-planting project in Sainte-Françoise.